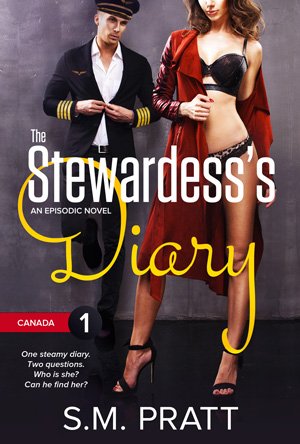 The Steamy Layover That Started it All


Follow the flight path of a determined captain as he seeks the owner of a diary.

Capt. Charlie delves into the written accounts of a mysterious stewardess, compelled by her increasingly progressive sexual adventures and excited by the clues he uncovers.

As he travels the globe to locate her, his obsession grows and his sexual horizons broaden, but will his womanizing tendencies prevent him from reaching his goal?

Episode 1: Canada introduces the mystery stewardess as a heartbroken woman. Alex, a fellow flight attendant on a red-eye flight to Toronto, recommends she stop looking for relationships and instead focus on enjoying the moment, trying out one-night stands. Will the stewardess quiet down her mind and pull it off?

I’m Charlie, a veteran pilot for a major international airline that shall remain nameless for reasons you’ll soon come to understand.

A year ago, while waiting for my flight to London in the airline’s lounge at one of America’s largest hubs, I discovered a special and highly personal journal among my belongings. How it happened, I’ll never know, but the beautiful brown leather notebook nonetheless appeared in my carry-on at some point between the time I left my New York penthouse apartment and arrived at the airport lounge.

Perhaps it was a mix-up at security, or some devious stewardess with sly hand skills, but I’ve since become obsessed with the person who wrote that diary, her stories, and—to be blunt—her unconventional sex life.

My best friend—let’s call him Bob—is one of my regular co-pilots. Bob advised me to forget about the journal and ignore my hunch to track down its rightful owner. After my initial reading of her hand-written accounts, the part of me who’s loyal to the airline and wants the best for our passengers certainly needed to find that stewardess and expel her from our company—or whatever airline she’s with. This woman is surely a threat to any crew with her irreverent disregard for our uniforms, her sexual behavior with passengers and airline employees, and the way she ignores regulations. She should clearly be punished for her conduct…

But after reading and re-reading each one of her journal entries, another, more animal part of me has grown fond of her complete lack of boundaries, her willingness to experiment, and her ravenous sexual appetite.

I’ve had my fair share of illicit affairs with female flight attendants and co-pilots, but none of them were interesting enough to be granted a second fuck by yours truly, let alone be courted or considered for a long-term relationship. But the woman who’s filled so many pages with delicate calligraphy and salacious words deserves my full attention. She’s certainly maintained it well past the time I closed the cover of her journal—again and again.

Imagining how her naiveté was gradually—and most willingly—robbed from her was simply… enthralling. She’s been haunting my wet dreams.

Now, every time I see an unknown stewardess, I wonder if she’s the one.

After many conversations with Bob over the past months during our overseas flights, I’ve come to share some of her journal entries with him. He agrees that I need to locate her. If not for the airline’s sake or to satisfy my personal curiosity, then for the mere reason that I could stop obsessing about her and resume paying attention to my actual job: piloting giant aircrafts and safely getting passengers from point A to point B.

The following short stories record my obsession toward her. There are ten in total. Each installment contains my mystery stewardess’s original journal entries for a specific location, followed by my own experiences in trying to track her down. You’ll discover what (and whom) I did in an effort to identify and locate my stewardess based on the clues she’s left in her diary. You can read the episodes in any order, but they’ll probably make more sense if you start from the beginning and follow along as I attempt to find her.

Ah, the things I’ll do to this mystery stewardess when I finally encounter her in the flesh!

I’m hard just thinking about it…

At last, I got to take a break from walking up and down the aisle. Most of the passengers in economy class were asleep and giving their service button a break. Most except for a workaholic in 8A and a musty-mustached man in 14D who kept winking at me.

How stupid was I to wear brand new heels on a red-eye flight? My feet and legs are killing me! If I don’t have blisters yet, they’re coming. That’s for sure.

But these black babies look fantastic and I enjoy being a little taller.

Maybe I shouldn’t have bought into the marketing hype, but high heels did make me feel sexier… and happier. And after my disastrous weekend getaway with Stupid-Self-Centered-Sam, I needed to take any emotional, mental, or shoe-related compensation I could get.

My sense of self-worth had to rise from this muddy bottom, and it had recently gone up by exactly three inches.