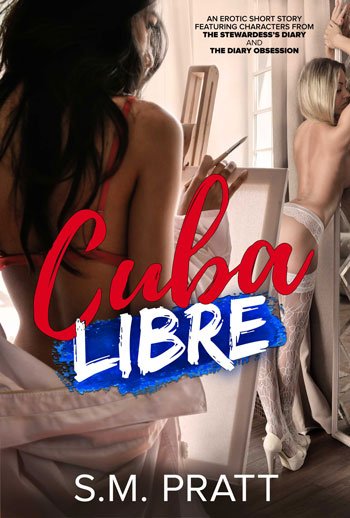 Summertime in Cuba can be torrid.

When not working, Edna Becker perfects her tan. Men constantly whistle at her, confirming her breast augmentation was worthwhile, but these guys do nothing but temporarily boost her self-esteem. She wants more.

Truth is, Edna doesn’t care how many men gawk at her. They’re off the menu. She’s always been a strict lesbian, and a picky one at that.

She craves a new lover, someone sexy to play with and occupy her time. What’s the point of having the perfect breasts if no one’s touching them?

While wandering the streets of Old Havana, Edna finds a poster announcing free art lessons by a Spanish painter named Valentina. With nothing to lose and a whole lot of time to kill, she walks in and joins a group of local students.

But in front of them stands a brunette. Petite, sexy, and attractive as fuck. Just her type.

Edna’s hot for teacher, and Cuba has finally gotten interesting: a new hobby worth trying and a woman worth chasing.

Will Edna succeed in seducing her teacher?

Cuba Libre is an FF short story filled with titillating details meant to arouse both men and women. If you like your lesbian erotica with a good storyline, then you’ll enjoy this short and very steamy read by S.M. Pratt, the author of an ongoing FFM series called The Stewardess’s Diary (first season) and The Diary Obsession (second season).

Warning: Contains mature themes and explicit content. All characters are 18+ as should be the readers.

Boredom had done it again.

I caught myself staring at the ceiling cracks in the bedroom I’d rented from a local family. How long had I wasted this time?

I got up, put on my sandals, and headed downstairs to wander around the streets of Old Havana.

Music boomed out of the windows from the living room next door, and two women with dusting feathers shouted their small talk over the up-beat songs. Kids played on the street, kicking a ball, screaming and showcasing way too much energy considering the heat. I smiled at them as I walked by, ignoring the men who sat on their front steps, commenting about my body.

No point in getting upset or offended. I’d learned to just take their words as compliments and smile. And perhaps imagine women had voiced those remarks instead.

Why did men feel the urge to do so? Was it genetics? Plain old machismo?

I readjusted the wide brim of my hat, a God-send under the blazing heat of the day. My orange sundress allowed for air to flow, but there wasn’t much of a breeze now. Or ever these days. Summertime in Cuba was much hotter than I had anticipated when I’d agreed to come work here for a few months.

Sweat beaded down my face, dripping onto my chest and down my cleavage. The droplets felt cool against my skin, tickling me a little but never enough. Nothing compared to a woman’s touch.

How I craved that right now… I wouldn’t mind licking the salty sweat from a hottie’s body or having someone slide an ice cube against my burning skin.

Alas, I had yet to find a lover here. I’d received one offer, but she was not my type, and I had to work with her, so I didn’t want to act on it.

At least not yet.

But my desperation was climbing as fast as the mercury was rising.

God, it was impossible not to sweat in this heat.

How did people manage?

They had to constantly hydrate, I realized.

Parched, I walked to the nearest bar and ordered myself a mojito, hoping its fresh mint and delicious rum would cool me off a tad. And perhaps a gorgeous woman would be sitting at the bar, doing the same thing.

Unfortunately, the only other patrons were local men playing a game of chess in the corner. There was just them, me, and the old bartender.

I finished my drink, then continued my walking excursion around the neighborhood.

Cuba was a gorgeous country, with beautiful white beaches and lively people, but I didn’t know any of them—except for my boss and co-workers, and the last thing I wanted was to hang out with them after work.

Life was too short for that.

And there was only so much tanning I could do. I’d already perfected my glow. Other than the tiny lines of my skimpy bikini bottom, my skin was already the color of a cappuccino. Since “wrinkly leather” wasn’t the look I wanted, my current shade was as dark as I ever let myself become.

So my efforts to occupy myself with more than beach time had led me to wander around the neighborhood a lot. And it’s what led me to finally stare at the poster in front of me.

For five weeks straight I’d walked by it, ignoring its vibrant colors, but today I decided to read it. I mentally translated the Spanish words.

Free painting lessons by renowned Spanish artist. Walk in and test it out. No strings attached. Materials supplied.

Why the hell not?

I made a mental note of the time, realizing it would start in an hour. Perfect. And if I was lucky, the studio would be air-conditioned.

But I wasn’t counting on it. This was Cuba after all.

August had started hot and muggy, and today was no different.

Sweat dripped off every student sitting in front of me, but the only beads that caught my attention were those that rolled down the petite blonde’s neck. She was chit-chatting with Pablo, the student sitting next to her.

Her accented Spanish, hair color, and complexion made it clear she wasn’t Cuban, but her golden tan hinted at her having been in the country for a while. Or at least somewhere as hot and sunny as here. If I had to bet, I would have guessed she was European, like me, but not Spanish. Could she be German? Her facial features and bone structure made me believe so.

She was just one of the students who’d shown up that afternoon. There was no reason to believe she’d show up at the next lesson, so I gave up on guessing about her background, but she was by far the most gorgeous student who’d ever stepped foot in this classroom.

The blonde took off her hat, then shook and loosened her long mane. Her blue eyes popped with an enigmatic twinkle.

There was just something about her. Her smile was a little too coy, her generous and unnaturally perky chest heaved just a little too much… and those sweat beads kept running down her cleavage, drawing my eyes to her skin. Her ginormous breasts looked out of place on her tiny body, and they certainly tested the strength of her dress’s spaghetti straps. Those poor things extended out and away from her skin like the cables of a suspension bridge, anchoring the stretched out fabric of her dress to her delicate shoulders.

I pulled my glance away from her to look at the clock.

Time to get started.

“Good afternoon, everyone,” I said in Spanish. “Thanks for coming to today’s lesson. I see that we have a few new faces. I’ll introduce myself first, then we’ll go around the room and you can do the same. Please share your name and experience with painting. I’m a Spanish painter who goes by the brush name of Valentina.” As always, I kept my real name, Virginia, to myself. “I’m teaching this class as part of a cultural exchange program between Spain and Cuba. I’ve been here for nearly six months now. I’ve got a few more weeks to go, so if you like today’s lessons, feel free to come back for more. These classes happen three days a week. Same time, same place.”

With a show of my hand, I indicated the man sitting to my far right.

I’d already heard his story. Pablo Pérez Rodríguez. Young kid, quite talented, but he couldn’t afford art supplies, so he came to paint here. He’d been to every single class I’d taught.

The gorgeous blonde introduced herself next.

“Edna Becker,” she said, a large smile on her thin lips. “I’m from Austria, but I’ve been here a little while. I work mornings only, as a secretary, helping with translation and communication with European countries. I’ve never tried painting before, but I love art.”

The group continued their introductions, then I instructed the students to don one of the white coats hanging against the back wall.

Today’s class was about simple objects. I’d chosen fruits and vegetables. I put a variety on a long table in front of them. I adjusted the object’s positions so they’d capture the best light coming in from the large window overlooking the street.

New students were tasked to only paint one fruit or vegetable while those more experienced could tackle a whole bowl that I placed on the left side of the table. I assigned each person an easel, gave them their supplies, then guided them step-by-step on how to proceed.

For the first time since I started teaching the class months ago, I had to keep reminding students to return to their easels. With all but one student being male, that Edna Becker had become quite the distraction for the rest of the students.

And perhaps for me too, I realized, as I forcefully took my gaze away from her yet again.