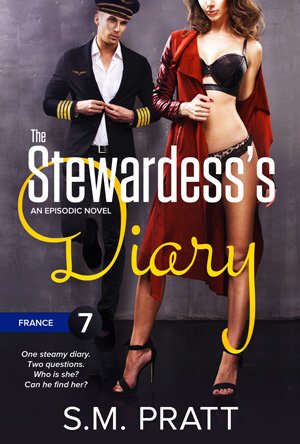 
Follow the flight path of a determined airline captain…

In Episode 7: France, the stewardess goes through a roller-coaster of emotions after learning of her aunt’s passing. Her past gets dug up and she exposes some of her painful romantic memories. Will the identifying details she slipped in her journal be enough for the captain to finally discover who she is?

I was lying curled up in the middle of my queen-sized bed, lost in my own fantasy, when a buzz reached my ear.

I grabbed my spare pillow and squashed it on top of my exposed ear to muffle the annoying rhythmic noise, but it persisted and pierced my sleepy veil.

Opening my eyes, I looked at the alarm clock on my nightstand: 6:03 a.m.

Who calls this freaking early?

I stretched out for my phone; the number had too many digits to be local. What the heck? I cleared my throat in a moot attempt to sound semi-awake. “Hello?”

Why would some French lawyer call me to talk about my aunt’s succession?

“I am sorry. My file says you speak French. We can continue in English.”

“I do. Either language is fine. It’s just that… it’s early here… Are you telling me my aunt Gabriella’s dead?”

“Hello? Are you still there?” I asked.

“I’m so sorry for your loss, miss. I thought you knew. I did not mean to announce such bad news to you in that awful manner.”

Now it makes sense… The numerous missed calls from my mom. The email asking me to call her as soon as possible…

“It’s alright,” I said. “I wasn’t very close to her. Barely knew her really.”

“Well, it seems she liked you very much because she’s left you her French property and business.”

“I’m not known for having a sense of humor. So, no. Mademoiselle Gabriella’s business was quite… particular, and I was calling to see if you could travel to Paris in the near future so I can show it to you. Then you could decide whether or not you want it, or if I should give it to the second person in line.”

“Would that be my mother?”

“I’m afraid not. Your mother will be receiving a check for her share of Mademoiselle Gabriella’s inheritance.”

“Can’t you just send me a check as well?” The idea of receiving money—whatever the amount—sure sounded good.

“I’m afraid I cannot discuss this matter over the phone. We need to meet in person.”

“Is my mother expected to go to Paris as well?” I asked, trying to wrap my head around my schedule, but nothing came to mind. I got up and walked over to my daily planner.

“No, and this phone conversation as well as our upcoming meeting need to remain a secret. Mademoiselle Gabriella specifically requested that you be the only person to know about her business. Her sister, your mother, is in no way to be made aware of it. Under no circumstances. Do I make myself clear?”

“Well, I’ve got a few free days at the end of next week. Would that work for you?” I asked, my fingers tapping on my agenda.

“Oui, bien sûr. I’ll let you make flight and accommodation arrangements, then please inform me of your date of arrival so I can clear my schedule and meet with you.”

“Give me a second,” I said while reaching out for a pen. I hated trying to add a new contact to my phone while talking on it.

I wrote his number down, then hung up after he once again shared his condolences for my loss.

Holy shit. What a way to start the freaking day!

Now wide awake, I made a mental note to return my mother’s calls. She probably needed a few words of comfort. Her only sister… I looked at the clock. Too early to call her now.

I headed to the shower and reflected on what I’d just learned while the water droplets massaged my back.

I wasn’t particularly close to Gabriella—I hadn’t seen her or spoken to her in at least two or three months.

How did she die? Was she sick? Or the victim of a freak accident? Why did she choose me as the one to inherit her business?

Gabriella never married, at least as far as I knew. She didn’t have children of her own, but why not give her business to my mother?

Come to think of it, I don’t even know what she did for a living.

I racked my brain while lathering my body with jasmine-scented soap.

What was the occasion? I couldn’t recall.

She always dressed in the latest trends. She incarnated modern-day fashion, except for her retro, super long and narrow cigarette holder she always had at the ready… Well as soon as she was outside restaurants and other non-smoking areas.

Maybe she worked in the fashion industry?

She had an air of superiority, but that could have been from her decade-long French immersion. Her cigarette holder didn’t help with that either. Who still used those nowadays? But it fit with her Audrey Hepburn wannabe look. She’d picked up the typical Parisian Pretentiousness syndrome, as I liked to call it. Not every Parisian had it, but I’d encountered enough throughout the years to start naming it.

But, if I have to travel across the globe to deal with this, Paris is probably a good place to do it.

Hair washed, skin exfoliated and squeaky clean, I got out of the shower, patted myself dry, and wrapped my hair in a towel turban before heading to my computer to plan my upcoming trip.

Twenty minutes later, I had booked my flight and hotel. I’d spend three days in the City of Lights. Too bad I couldn’t think of a boy-toy to bring along with me. Paris was so romantic. But maybe I could hang out with some old friends I knew who had settled there?

Who is it again? Renée and Luc? And there’s also Mark and…what’s-her-name…?

I decided to check Facebook to see if they were still there. And if so, maybe they’d be around next week?

After some online-stalking and catching up on these friends’ lives (at least the parts they shared publicly), I learned that Mark had left town, but Renée was still there. I sent her a private message. Seemed she and Luc no longer were an item (at least based on her relationship status… and he was nowhere to be found on her pictures).

I hated breakups. I loathed having to choose sides. But do I really have to? Luc was a nice guy. Maybe I should find out what he’s been up to?

I finally found his profile, then saw the photo of someone I hadn’t expected to see. Right there, near the top of Luc’s timeline, was a post by the man who’d broken my heart over a decade ago. The post, which had 255 likes, announced his upcoming wedding in Paris. I swear my heart winced in my chest. Or maybe it was left-over heartburn from last-night’s extra spicy pizza.

Before Facebook existed, he’d broken up with me via email—what would be a jerky move nowadays—but his work had him gone for months, unable to access phones, so email was probably better than waiting to do it in person.

But obviously, I hadn’t become friends with him online—that would have brought on too many painful memories—but it seemed our common friends from back in the day had connected with him on the social platform and were sharing and spreading his good news, and, of course, congratulating him.

I pushed that new information past the precipice of my consciousness.

At least, I tried to.