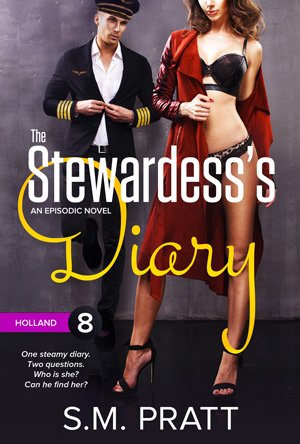 
Follow the flight path of a determined airline captain…

In Episode 8: Holland, the stewardess and one of her co-workers go cycling through the Netherlands and encounter a few well-hung men in the process. The captain, following the clues he’s found to date, believes he may have found her. Did he really?

Alex flipped a coin in the air. “Heads. You drive, but I get first dibs on men.”

“As you wish.” I took the key the car rental agent had been patiently holding, waiting for either of us to grab. “Thanks,” I told him. “We’ll bring it back in one piece in a couple of days.”

He smiled and nodded, then we made our way to the compact we’d rented to travel to the southern part of the Netherlands.

Alex walked in front of me wearing her knee-length skirt and curve-hugging T-shirt. The lack of straps underneath the thin fabric of her top made it clear that a bra was an optional item for her, at least today. I’m sure the car rental guy hadn’t minded at all. I’d noticed his wandering eyes here and there while we discussed the contract. Let’s just say that my friend’s gorgeous red hair—as bold and eye-catching as it was—hadn’t been the focus of his attention.

Alex and I had both traded our uniforms for comfortable summer wear a few minutes earlier. I had opted for a spaghetti-strapped dress. And based on the bright sunlight that shone above us upon leaving the Amsterdam airport, we’d chosen wisely.

In a few hours, we’ll be in Maastricht.

I was looking forward to getting out of the capital for once, past the flat lands of the north. Alex, the one flight attendant I knew who truly enjoyed camping and other outdoor activities—and the most open-minded as well—was surely the right person to accompany me on this short adventure.

Once out of the capital and on the A2 highway, Alex folded the map the rental agency had given us then stowed it in the glove compartment.

“This is so empty and orderly compared to my car,” she said after clicking the compartment shut.

“You have a car?” I asked, surprised.

I turned to look at her briefly. “Maybe you can find yourself a mechanic with benefits,” I said.

She laughed. “Yeah. I should really consider that. You have one?”

“No. I sold mine a while back. I wasn’t spending enough time in town to make it worth my insurance premiums and parking costs.”

“Yeah, but you get to see the whole world instead.”

Yes, I was grateful for the flat and beautiful scenery that surrounded us right now. Thousands of miles away from home. “You’re totally right. We’re damn lucky… Here, right now… Would you ever considering quitting this job?” I asked Alex.

“What for? It’s THE perfect job! How else could you see so much of the world AND get paid for it?”

“What if you were given a unique opportunity? What if you didn’t have to do much and could still make a ton of money?”

“Like marrying a billionaire? That could be interesting for a while, but I’d get bored. I mean… One dick… for the rest of my life?”

“Yeah, that could get a bit boring. But what if this opportunity came with built-in variety?”

“Then I’d jump on the chance to do it. Any of my wealthy sex slaves could pay for my travels around the world if I had an urge to go somewhere. But let’s face it: it ain’t gonna happen. Worse odds than winning the lottery. No point in dreaming about it.”

Yeah. A once in a lifetime opportunity. Should I take Nicholas’s offer and settle in Paris?

But before I could think about it some more, Alex resumed her chit-chat. “So, what’s up with you these days? We didn’t get much of a chance to catch up on the plane.”

Should I tell her?

While I trusted her with my life during work, I wasn’t sure I was ready to share that secret with her. After all, Nicholas had warned me the opportunity had to remain private, and Alex did enjoy gossiping…

I cleared my throat. “You know… The usual—”

“Did I tell you about my last guy in Boston? All talk and no cigar. I mean, he was good with his hands and his tongue, but his dick was like this,” she said.

I took my eyes off of the road for a second to look at her. She was moving her pinky up in the air.

“Oh no,” I said before exploding in laughter with her. “Sorry about that.”

“Well, there’s only so much one can do with imagination… But I do travel with toys for these rare occurrences.”

“You’re braver than me. I keep mine at home, safe in my top drawer. Aren’t you afraid of getting stopped and searched at customs?” I glanced at her briefly. She was shaking her head.

“Could be a great ice breaker for the customs guy if he’s cute. If not, then no harm done. It would probably give whoever finds it some mental material for his next solo session… God! I’m really hoping for a well-hung Dutchman this weekend. I need to make up for it… And you, did you follow my advice?”

“Guess I never thanked you for that… Let’s just say that I’m on the accelerated program now,” I said.

I nodded. “Hell yeah. I had no idea my life could become that entertaining by making one tiny mindset shift.”

“You’re overthinking it. Glad to have helped. Buy me lunch and we’ll call it even.”

“Sure. And let’s hope we find ourselves some handsome studs!”

“No doubt we will,” she said before cranking up the volume on the radio.

When we reached the center of Maastricht, Alex rolled down her window. A mild skunky smell wafted in the car as the heavier traffic forced us to slow to a crawl near a coffee shop.

I’ve never seen her smoke… Come to think of it, we’ve never even talked about weed. Ever.

The traffic got moving again and she sighed. “How I’d love some of that,” she finally said, breaking the silence.

“I was thinking the same.” I smiled and briefly turned to look at her. Her eyes were round, one eyebrow higher than the other. I returned my eyes to the road in front of me.

“First you learn to embrace my type of relationships with men… And now… My type of occasional entertainment as well? I’m impressed with my little protégée. I thought the possibility of random testing would have you scared shitless.”

“At first I was… Then I found a way to circumvent the results.”

“Good ole Google pointed me to a helpful forum. The reviews for these cleansing kits had me adding them to my cart in no time. Have yet to be tested, though. Unsure if they’ll really work, or if it’s all a big marketing scam and I’ll lose my job.”

“For the record, they do work. At least the one I used during my last test… I came out clean.”

“That’s a relief.” Then again, I do have another job opportunity waiting for me if I were to fail one of those tests…

“So, what do you say?” she asked, tapping me on the arm and bringing me back to the present moment.

“When in Rome… Let’s enjoy some of the local delicacy!”

Alex clapped and let out a few high-pitch screams of joy.

Tired from the red-eye leg I’d worked hours ago, but wanting to have a good time, I wondered what was more important. “Should we do that before finding a hotel room?” I asked Alex.

“Way to go, girl! I’d say your priorities are right. There’ll be lots of time to find a hotel and bike rental shop after our first stop.”