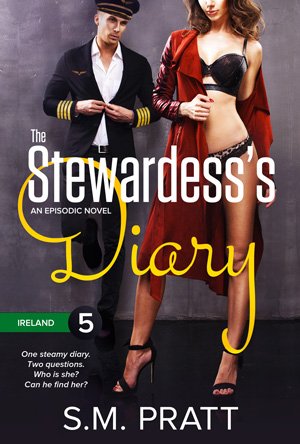 In Episode 5: Ireland, the stewardess heads out on a romantic weekend getaway at an Irish castle with her current boy-toy. But she has no idea that the castle offers such unique amenities to their patrons. Butlers, maids, and even guests seem to be at everyone’s beck and call.

I smiled at my boy-toy Matt when I pulled my duty-free cart next to row 44.

I reached up and toggled the call button off. Sitting next to Matt, an older gentleman held the in-flight magazine opened on the perfume page. He was clearly the one who’d pressed the service button.

“Do you think my wife will like this sample box?” he asked me, pointing at a Dior variety boxset.

“I don’t know your wife and her taste in perfumes, but this particular assortment’s quite popular. And I’m sure she’ll absolutely love the thoughtful gesture.”

The silver-haired man smiled at me. “Perfect, I’ll take it. Now let me find my credit card,” he said before digging through the seat pocket in front of him. A few seconds later, he unbuckled and got up, so I moved my cart forward to clear the aisle. It seemed the man had placed his wallet in the overhead compartment.

While waiting, I glanced at Matt, who was tucking a strand of his long brown hair behind his ear. He winked at me, his chocolate eyes disrobing me from within. I couldn’t believe how handsome he looked… and how lucky I was to have him with me right now. But maybe it wasn’t all luck. I’d learned from our planned Mexican getaway. This time, I’d made sure Matt wasn’t going to cancel on me: I’d gotten him a seat on my flight. But our plane wasn’t going fast enough. We’d be landing in Dublin in less than an hour. But still, that was too long. Couldn’t I already be naked next to him? Hell… over and under him as well? The more positions, the better.

“Ah, there it is,” the older man said, a brown leather wallet in hand.

I opened the cart drawer where the perfumes were stored and found what he wanted. After taking the credit card he offered, I processed the transaction, then handed the gentleman his card back along with a duty-free bag that contained his wife’s gift. How thoughtful of him. Can’t say anyone’s ever bought me duty-free souvenirs, but I can buy my own. Come to think of it, pretty little trinkets and perfume bottles are at the bottom of my wish list. I’d much rather enjoy a sensual getaway with a tall hottie like Matt. Collecting experiences is much better than accumulating objects. Especially when these experiences brought me to the brink of earthly pleasures.

I smiled at the elderly passenger and Matt before making my way back to stow the duty-free cart in its rightful location, lost in my own thoughts. When Matt contacted me to say that things were through with his ex, I couldn’t have been more pleased. If there was a guy whom I wouldn’t mind having a string of one-night stands with, it was Matt. We’d known each other for over six months now, since his brief stint as a flight attendant. I always knew he wasn’t relationship material, but that aspect of his personality was fine with me now; I wasn’t looking for love anymore—at least, I think I’ve convinced myself of it.

I couldn’t think of anyone better to share a long weekend with at a secluded, one-of-a-kind Irish castle—according to the online reviews I’d found. I’m sure our free time will be spent having sex more than taking in the scenery.

And I was fine with that.

I could enjoy the beautiful Irish landscape some other time.

Customs cleared and our small overnight bags duly stashed in our rental car, Matt closed the trunk—or the boot, as he called it.

“Want to drive?” he asked, keys in hand.

I had no issues driving in general, but couldn’t say I felt super comfortable doing it on the left side of the road.

“I can if you want to close your eyes and rest, but—”

“Rest? I was asking to be polite. I’d much rather drive! It’s been a while since I drove on the correct side of the road,” he said, a sarcastic smile on his lips. “This little sports car should be great craic to maneuver around winding roads.”

I got on my tip-toes and kissed him. How I loved Irish accents… Or any accent for that matter. “It’s all yours!”

Being spoiled and letting men treat me like a princess was quite a pleasant change. I should have started years ago.

As we headed west out of Dublin, embarking on our three-hour drive toward the secluded castle, we finally left the urban scenery and the green rolling hills gradually began to expand in all directions. The odd rock wall or herd of sheep broke the emerald color scheme every now and then. The gray sky hung low, threatening to rip open, but it appeared that good ole Irish luck was on our side.