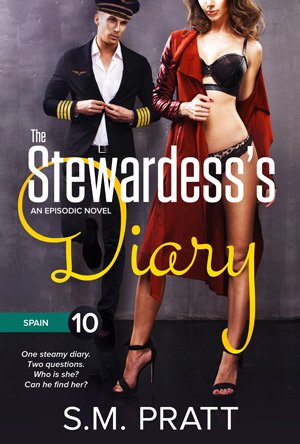 In Episode 10: Spain, the first-season finale, the stewardess comes to terms with her sexual desires and leaves a clue behind for the captain to find. Will it be enough for him to finally uncover her identity and meet her?

Not only was Spain one of my top countries, but San Sebastián, aka Donostia, was my favorite city in the whole world.

The scenery, the architecture, the beaches, the food, the people… What was not to love?

And those Spaniard men? Seriously, how could so many of them have drawn winning numbers from the genetic lottery? Maybe I was partial, but with geographical roots as diverse as theirs, it seemed that both men and women ranked way above the world’s average looks in the land of the tapas. Or my attraction to the alluring Spaniards could be related to the fact that my father’s ancestors had shared their genes generations ago. I’m sure Freud would explain it in a way that would make me blush, but it wouldn’t shave an ounce off my excitement about the coming days.

As my plane landed in Bilbao, I wondered how many times I’d visited Donostia to date? Six, seven… ten? Too many to keep track of, yet still not enough for my taste.

But thankfully I’d made a few friends, which helped reduce the costs of my visits. During my last trip, I’d found the perfect apartment on Airbnb. So, this time, I re-connected with the owner and managed to bypass the site’s fees by arranging to pay him cash instead. I looked forward to once again sipping a few drinks while overlooking the ocean. Best of all, the beaches and places to eat delicious pintxos paired with local wines were all within walking distance. I still couldn’t wrap my head around the official difference between pintxo and tapa—perhaps it was a regional vocabulary preference or a Basque word for the same thing, or maybe it had to do with the toothpicks—but the bite-sized pieces of delicious local specialties were always incredible. My mouth was watering.

I couldn’t wait to see if I could uncover new ones I’d yet to try.

Both new pintxos and new men could satisfy my hunger.

As promised, Eduardo met me when I got off the bus from Bilbao.

“¡Hola amiga! ¿Qué tal tu viaje?” My short, bearded, gray-haired friend kissed me on both cheeks, and before I could reply to his question, he surprised me by switching to English and repeating himself. “I want to practice my English with you. So, tell me. How was your trip, my friend?”

I smiled at him. “All good. I’m so happy to be here again. How have you been?” I asked.

As expected, based on his behavior during my previous visits, he grabbed my luggage from me and wheeled it to his car as he stumbled through his answer.

Chivalry is alive and well in Spain. So nice.

After putting my suitcase in his trunk, he drove me to the apartment and, through various iterations and self-correction of his answers, he shared a long list of mundane events and incidents that had happened to him and his wife since I’d last seen them. The thing that lit him up the most was the classes he’d been taking and his upcoming English exam.

“Will you come to my birthday party tonight?” he asked.

“¿Cuántos vas a cumplir?” I asked before catching myself. Speaking to Eduardo in English was a little weird. “Sorry. How old are you gonna be?”

“I will have fifty-two years old,” he said, his eyes glued to the road in front of him.

“Happy birthday! But you’ll be, or you’ll turn fifty-two, not have, like in Spanish,” I corrected him.

“Ah, yes! Thank you. I always make this mistake. So, do you want to join us? It will be my wife, my sister, and a few friends. All good people.”

The traffic had come to a halt in front of us, so he turned to look at me. His smile was genuine and warm.

If the past months have taught me anything, it’s that when life hands out unexpected invitations, it’s best to accept them.

“Nothing, just you. No gift. We’ll just hang out, have some drinks and pintxos, and chat. Probably in English, since a few of my friends are also looking for opportunities to practice.”

Just as we turned the corner to the street I’d be living on for the coming days, he pointed to a bar. “This is where we’ll go tonight. Meet us there at around 10 p.m., okay?”

“Perfect. Should I dress up?” I asked.

“No, wear something comfortable,” he said just before turning around the block.

Luckily, Eduardo spotted a place for us to park within a minute or so.

We walked to the apartment together. Eduardo rolled my suitcase behind him at his insistence, while I only had to deal with my purse. Then he carried my bag up the five flights of stairs—and for that I was really thankful. Once we reached the izquierda door, he pulled out the sturdy, oddly-shaped key I recognized. It was nothing like the typical keys I carried. He inserted it into its old-fashioned keyhole and spun it two full counterclockwise rotations to unlock it, then pushed open the door.

I entered my home-away-from-home with a delighted smile on my face. The exquisitely decorated apartment was just like I remembered it. The exposed beams in the living room gave it a certain anchoring quality, and the fresh-cut flowers in a vase in the center of the kitchen table were the cherry on top. The windows had been left open, letting in a lovely, warm breeze.

He handed me the keys, and I reached into my purse for my wallet. I pulled out the agreed-upon rent and gave it to him.

“Do you want a receipt?” he asked.

“As usual, you can help yourself to any of the food in the cupboards or fridge. And feel free to read any of the books and watch any of the movies stored in the living room. Make yourself comfortable and call me if you need anything.”

“Perfect. I’ll probably take a nap; then I’ll see you tonight at the bar.”

And with that, we hugged, and he left.