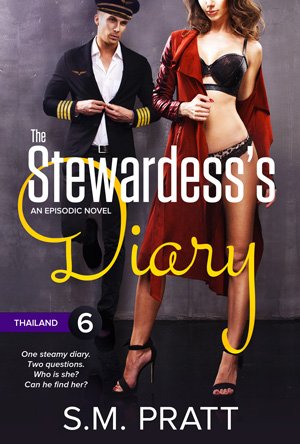 Steamy Experiences at a Spa

In Episode 6: Thailand, the stewardess explores Bangkok with a fellow flight attendant. While at a spa, she and her coworker experience sensations that most tourists visiting Thailand will never experience. She crosses boundaries that even the captain would never dare touch. Will the captain manage to get closer to the stewardess by tracking down her unique Thai coworker?

After turning on the lights and making the morning announcements in both Thai and English, Ellie came to chat with me in the galley at the back of the plane.

It was my first time working with her. She was the living incarnation of sweetness, politeness, and cordiality with every guest and flight attendant. Since I’d discovered (during our pre-flight meeting) we’d both be spending a few days in Bangkok, we’d been using our few minutes of downtime here and there to get to know each other a bit more. She didn’t talk about herself much, though. And it’s not like I loved talking about myself either… but not answering her questions would have been impolite. So we ended up mostly chatting about me, then about nothing and everything, except her.

However, I wanted to ask her one specific question, but I’d yet to find a way to phrase it without sounding strange or rude. Ellie looked like a mini Thai Barbie (if such a thing existed). She had that weird big-breast to small-waist/small-hip ratio that the famous doll portrayed. I couldn’t say that I’d come across many big-breasted Asian women before.

She has to have had a boob job, no?

Ready for the flight’s final food service, I followed Ellie with the cart down the port aisle. She looked as fresh and energetic as someone who’d just woken up from a ten-hour sleep in the world’s most comfortable bed.

As she walked backward to the front of the economy section, pulling the cart while I pushed it, I couldn’t help but stare at her pale—probably cosmetically-bleached—skin, her shiny, silky black hair, and her impressively large breasts for such narrow hips. The short-sleeved white uniform blouse she wore had to have been tailored especially for her.

Ellie and I began offering hot breakfast to the economy folks sitting on our side of the plane, starting with those at the front. We slowly handed out small plastic trays to our sleepy, red-eyed passengers. They got to choose between a tomato-and-cheese omelet or French toast, and both were accompanied by yogurt, orange juice, and a two-bite fruit salad. We then offered hot coffee or tea prior to moving our attention to the next row. Slowly but surely, we made our way toward the back of the plane. Ellie served those in the front while I attended to the rows behind the cart.

After taking 34A’s drink order, Ellie called out to me, so I turned my attention to her. She gave a slight head nudge toward the man sitting right next to where she stood while pouring hot coffee into a disposable cup.

Curious, I paused my service and looked at the blond man. I couldn’t see much from where I stood, but his medium-length hair and the profile of his nose and jaw made me realize who he was. I’d spotted him when he’d boarded. Handsome would have been an under qualifier for this man. I looked at Ellie again.

She stretched her upper body across the other two passengers sitting between her and the woman who was sitting by the window. “Here you go, ma’am,” said Ellie, her large breasts coming less than an inch from handsome 34C’s face as she delivered the woman’s drink.

She moved out of the passengers’ way and smiled at 34C. “Sorry for my reach,” she said.

“No problem at all,” said the blond man before pushing the button on his armrest to straighten the back of his seat, which made his upper body move forward a bit. Is he hoping for seconds with 34B’s upcoming drink delivery?

“Green tea?” asked 34B, an older Asian man who looked up from his food tray just long enough to make his request.

Ellie made 34B’s drink, then winked at 34C while she served 34B his tea. No boob contact, but I swear she overfilled 34B’s cup just so she could deliver it super slowly to grant 34C more time to stare at her breasts. Man, she’s smooth!

Drink delivered without a drip, she looked at the handsome blond man again. He cleared his throat then asked, “Black coffee, and do you have any salty snacks left-over from the previous service?”

Ellie looked at me with a large smile before replying, “Let me check.” She motioned for me to back the cart a bit, then adjusted her scarf to clear the front of her cleavage.

I backed the cart as she’d requested, even though we didn’t have anything but breakfast trays in the slots and hot drinks on top. What is she doing?

She bent down and rummaged through the trays, looking for snacks that both she and I knew were not there. But 34C’s eyes were glued on her cleavage. She was obviously taking her sweet time and enjoying the man’s attention.

36A cleared her throat next to me, so I turned to her and handed her the breakfast tray I’d been holding in the air for nearly a minute now.