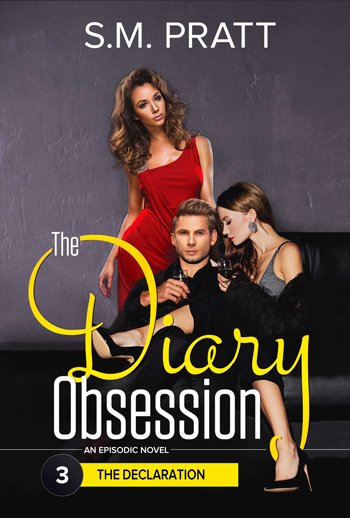 An FFM Bisexual Menage and Romance in the Making

Weeks have gone by since I last wrote in my diary. I deprived myself of my daily ritual so I could focus on work (instead of day-dreaming about Vee). The empty pages of this journal seem to invite romantic thoughts faster than a flame attracts moths.

Safe to say I didn’t succeed in getting her out of my mind—or out of my heart—but at least I made great progress with the business. I met up with Nicholas a few times to clarify facts and answer some questions. I even began planning my first official charity soirée, which will take place in a few months. With my mind endlessly spinning, trying to understand how Gabriella ran her business, my homesickness appeared to have departed for good.

While I haven’t documented my thoughts about Vee over the past weeks, she and I video chatted nearly every night. We talked about nothing and everything. Well, everything except my feelings. Those I’d managed to keep stuffed away and packed so hard that my heart threatened to explode with each beat booming in my chest.

I just hoped my impending emotional outburst would be appreciated instead of rebuffed.

Thankfully, Nicholas handed me my first official paycheck, which I used to splurge on new business outfits, new sexy lingerie, and spare cash for my upcoming trip to Spain.

My European lifestyle was once again enjoyable, and the horizon showed nothing but proverbial and literal blue skies as I packed my bags to go and visit my Spanish lover.

I took my phone out of airplane mode to text Vee.

Not even a minute passed before she replied.

Text me when you’re ready to exit the airport.

I’ll loop around to pick you up.

My heart syncopated as a large smile drew on my lips.

I’d soon feel the warmth of her embrace again. And, if my plan went well, I could work up the courage to tell her how I really felt, deep down.

I didn’t want to scare her away by voicing those special words too early, even though holding them in was slowly but surely making me crazy.

The line of passengers wasn’t moving. My Vee was so close yet so far.

Perhaps it was nerves, habit, or boredom, but I double checked that I hadn’t left anything in the seat pocket in front of me, even though I hadn’t used it at all during the flight.

Finally, the passengers around me began advancing. I retrieved my overnight bag from the overhead bin, then marched out of the jetway, my eyes scanning for the exit signs as I retrieved my phone to text Vee yet again.

A light breeze greeted me as I escaped the terminal. I scanned the parked cars around me, their blinking hazards distracting me as I tried to identify hers, but none of them were Vee’s.

I inhaled deeply, part relieved I hadn’t kept her waiting and part nervous about seeing her again. My feelings had grown while we were apart, but how would I react now, next to her?

I spotted her BMW advancing toward me, and my nervousness turned into elation. Not just joy or happiness. I’m talking about stupidly-in-love-and-happy excitement that couldn’t be wiped off of my face by even the best plastic surgeon.

She parked her car, and I heard her trunk pop open as I approached, so I tossed my bag in before taking a seat next to her. As though her citrusy perfume had powers of its own, my body began twitching in all the right places.

After giving me a polite double kiss on the cheeks, she merged back with the busy airport traffic.

“I’m so glad to see you,” I said, partly stung by her tepid demeanor, but I also knew she didn’t like PDAs or Public Displays of Affection. (A few weeks back, she’d clarified that cars weren’t private spaces, so I knew her rules were in full force now.)

“Me too,” she said, taking her eyes off of the road for just a second as she smiled. “Soon, I’ll show you just how much.”

“Guess who’s in town?” Vee asked as she swerved to change lanes.

“Of course, he lives here.” She briefly turned to meet my eyes before returning her focus to the road. “I meant someone you know.”

“No. He’s in Donostia. Look in the cup holder for a hint.” Her head nodded toward those in between our seats.

I reached in and found her rolling paper, a bag of tobacco, a lighter, and a box of matches. The latter piqued my interest, so I brought the black and red item closer to read its label.

While the letters didn’t make sense visually, I recognized the sounds I made as I read the words aloud. “Musik Bocks… Ah! I haven’t seen a wooden matchbox in years!”

“Why not?” I said before dropping the box in my purse. “But I don’t get the hint. What is it?”

My heart suddenly sank, as though my unsightly jealousy had added weight to it. I hadn’t expected to hear his name so soon yet again. Words escaped my lips before I could restrain myself.

“You two are really inseparable now…”

I stopped there, letting my unfinished thought dangle as I looked out of the window, afraid I’d already said too much.

The silence grew heavier with each passing second. My curiosity had the better of me, so I turned to look at her again.

She was frowning and shaking her head. “No,” she finally said. “I ran into him yesterday while buying tobacco in a shop. I had no idea he was even here, in Madrid.”

“Wasn’t he staying at your house in the mountains?”

She shook her head again. “I kicked him out before I went to Paris. We had a… disagreement.”

I left it at that. A full song aired on the radio while we kept quiet, which allowed my mind plenty of time to fill in the gaps with possible scenarios—none of them particularly noteworthy—so I pushed my luck, hoping to learn more. “So, have you heard his new band?”

“No. He just gave me his matchbox and said he was playing all week.

“Are you planning to go?”

She sighed loudly before speaking. “I don’t know. This week is super stressful. And with the way we left things last time—”

“Enough about him then.” I knew that now wasn’t the time or place to mention my feelings for her, so I opted for the second thing that popped to mind: her work. “Tell me, who did Marcella manage to get for you?”

“Wow! She wasn’t kidding when she mentioned international opportunities.”

“Yeah. The woman is connected. But getting them here is only half the battle. I’ll have to woo them with my exhibit.”

I extended my arm and gently tapped her lap. “I’m sure you’ll do great.”

Her hand left the stick shift to squeeze mine. “Thanks again for coming here. You don’t know how much this means to me.”

Then, before I could enjoy our quasi closeness, she peeled my digits away from her lap.

Even with her PDA rules, I remained hopeful that her words meant she was on the same page as me.