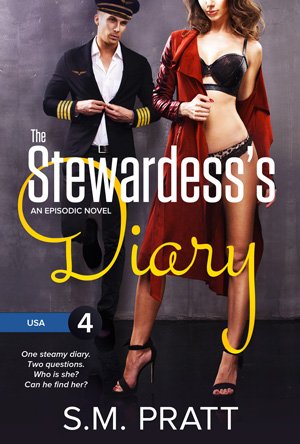 
Follow the flight path of a determined USA airline captain…

Episode 4: USA: While in Los Angeles, the stewardess and one of her friends decide to interview for a publicity campaign promoting an aviation school. They discover what it’s like to get screwed—both literally and figuratively—by manipulative, cunning, and good-looking men in L.A.

After handing the woman sitting in 5A her mini-bottle of Chardonnay and the chicken-breast sandwich she’d purchased, I peeked out of the porthole. Absolutely no clouds here. The same was expected for Los Angeles this weekend. In a few hours, I’d be seeing my friend Katrina, whom I haven’t seen in ages… 13… 15 years already? I was looking forward to catching up with her over a couple of days.

I continued with the in-flight service, turning my attention to a distinct-looking blond man with shoulder-length wavy hair. He was quite handsome, save for his oddly crooked nose, but it added to his charm. I interrupted his chat with the young exotic woman sitting next to him. I couldn’t tell her ethnicity, but she could have been the love child of an Asian-Brazilian couple. Long silky black hair draped over her shoulders, some of it falling over her large breasts. Her eyes were not almond-shaped to match her hair; they were round and light-colored. She reminded me of a National Geographic cover I’d seen years ago.

I smiled at them. “Sorry to interrupt, but what would you like to drink?” I asked the lady first, handing them both a paper napkin while waiting for her reply.

A shy smile preceded her words. Her green eyes met mine when she spoke. “Diet Pepsi, if you have it?”

She nodded. I then turned my attention to the rugged man seated next to her.

“One second,” he told me, his finger in the air while he turned to the woman. “Why don’t I buy you a drink, to celebrate. After all, you’re on your way to Hollywood.” The woman’s eyebrows slanted and so did her mouth. “Come on… One drink. On me. You may become a big star one day. I’d love to brag that I bought you a drink once.”

She nodded, her cheeks registering a slight change toward pink.

The blond man turned toward me. “Let’s make that two sparkling wines,” he said while digging his wallet out.

“No problem. That will be eighteen dollars, sir.”

I processed the payment and handed them the mini-bottles while reflecting on my friend Katrina, who, just like that young woman, had come to L.A. to make it. As far as I knew, Katrina still hadn’t. The city was filled with young women like them, with big dreams and varying levels of acting talent.

I continued with the rest of the service, greeting people and serving them. Most were excited to be headed to sunny California: a family of seven was on their way to Disneyland; some were headed home for family reunions, and others were traveling for business purposes. Overall, the mood was definitely festive.

By the time I reached the back of economy, a bell chimed. I secured the trolley then walked toward the lit indicator. Blondie and Exotic-Girl were the ones who had requested my attention.

I arrived while he was finishing a sentence, “…And that’s how I became a casting director.”

“So, you hire actors?” she asked, her doe eyes fountains of innocence and hope.

“Of course,” he replied before turning his attention to me.

“Hi, could you get us another two sparkling wines, please,” he asked, a wide smile on his face, his hand now on the girl’s knee.

Once in the galley, I grabbed the drinks then returned to Blondie’s seat with my payment processing machine in hand. As I walked toward him, I noticed his head sticking out in the aisle. He was watching me come toward him, eyeing me up and down as though inspecting prey in a bar.

I tried to keep my skin from blushing, but I could feel heat rushing to my cheeks. Is this shyness or arousal? I didn’t mind being ogled by a hottie, but I was working after all, and he was clearly hitting on Exotic-Girl sitting next to him. What kind of man acts like this? He pulled his head out of the aisle once I got within a couple of feet from him.

“Here you go, sir,” I said, handing him the drinks.

We repeated the payment routine. I handed him the receipt along with the processed credit card, but he paused, his hands almost picking up the items but stopping short by an inch.

“This may sound a little strange, but my company is running auditions tomorrow, hoping to cast the role of a female flight attendant. I realize you’ve already got a job, but your work experience makes you the ideal candidate. The campaign is aimed at female flight attendants, just like you, who want to become pilots.”

I frowned at him, confused. “You’d like me to participate in a movie?”

“No, no.” He shook his head. “It’s a publicity campaign. Short videos, pictures, posters, that sort of stuff.”

“But I’m not based out of L.A.,” I said, pushing the card and receipt toward him, hoping he’d grab them this time.

He did. “We’re casting tomorrow and filming on Sunday. Very short-term gig. Possibly extra money if you get the part. Are you staying in town for the weekend?” he asked, his eyes now focusing on putting the credit card into its rightful slot in the black-leather wallet he was holding.

Is he serious? Maybe I’d get a chance to hook up with him… Then again, hard to compete with Exotic-Girl… but why not? Then I thought of Katrina. “Is this open to anyone?”

“Yeah, of course,” he replied, now digging for something else in his wallet.

“I’ve got an acting friend who may be interested. Can she come, too?”

“The more the merrier,” he said, pulling out a business card. “Tomorrow morning at 10 o’clock. This address,” he said, pointing to the text that was printed on the front of the card.

“Thanks,” I said, taking it from his hand.

“Oh, of course you should come too! I was just about to mention it to you,” I heard him say as I walked away, heading back toward the galley at the back of the plane.