Several of you once told me that you’ve been to Canada before, so this particular travel update won’t necessarily surprise you.

I’ve spent several years in Canada, living in various parts of the very large (but not so populated) country.

According to Google, Canada’s population is just over 38 million inhabitants as of June 2021. Considering that the country covers 3.8 million square miles (9.9 million square kilometers), its population is far from being dense.  Only Russia beats Canada in terms of country size (USA is 3rd, see here: https://www.statista.com/statistics/262955/largest-countries-in-the-world/). Like Russia, a big chunk of Canada is just too cold for most people to inhabit. The majority of Canadians tend to live close to the US border, in the “warmer” climate around the 49th parallel. Some of the country dips below that latitude, especially in the eastern part.

For those of you who’ve read the very first installment of The Stewardess’s Diary, you’ll know that our characters go camping around Banff. If you’ve only seen Toronto, Ontario, or some of the other large cities on the eastern side, like Montreal or Halifax, then you’ve missed out on what I consider the most gorgeous part of Canada: the Rockies.

Here are a couple of my own photos from about a decade ago: 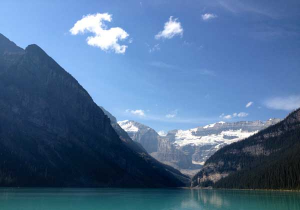 This photo hasn’t been photoshopped at all. It’s just this beautiful (and the lake is always cold, even in the hottest of summers). 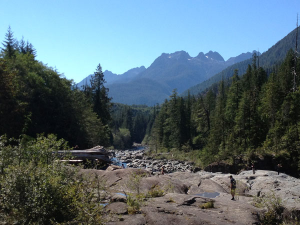 Can you imagine camping in these gorgeous surroundings? Bears ARE something to watch out for at ALL times.

The Rockies are truly majestic and offer fantastic views. Take a look for yourself here:

I don’t believe there’s such a thing as “Canadian cuisine” but since so many of you liked the Colombian food photos, here is a “Canadian dish” but calling it “cuisine” would be a stretch. 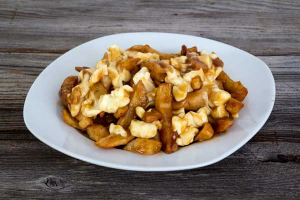 It’s originally from the province of Quebec, where the official language is French, but it has long since spread across the entire country (and I’ve found it in various restaurants around the world).

It’s a salty/fatty snack I typically enjoy after a few beers. It consists of french fries topped with fresh curd cheese and steaming hot gravy (which helps to melt the cheese). There are several variants on this dish, including some with spaghetti sauce, assorted vegetables, and/or meats. You can learn more here: http://www.thecanadianencyclopedia.ca/en/article/history-of-poutine