This local expression can be interpreted in many ways, but it roughly means “this is living!”. (click the link above for more information).

I spent five or six months in Costa Rica quite a few years ago. I enjoyed spending time there and met some wonderful people, both locals and expats like me.

The pace of living is slower, the cost of living is lower than North America (although they have dual pricing on things/services. If you’re a gringo, prepare to pay more than locals).

END_OF_DOCUMENT_TOKEN_TO_BE_REPLACED

Viva Mexico! As many of you may know, I spent several years living in the beautiful country of Mexico. In this travel memory, I will share with you some of the beautiful encounters I had during my stay.

Off the Beaten Path in Mexico

Similar to the Stewardess in Episode Two of the first season of The Stewardess’s Diary, I spent my time in Mexico on the Yucatan Peninsula. This area is home to some of the most beautiful beaches (Cancun, Playa del Carmen, and all of the Riviera Maya). Many of you are probably familiar with the beaches, so I’m going to show you some of the lesser-known parts of this area.

END_OF_DOCUMENT_TOKEN_TO_BE_REPLACED

Several of you once told me that you’ve been to Canada before, so this particular travel update won’t necessarily surprise you.

I’ve spent several years in Canada, living in various parts of the very large (but not so populated) country.

According to Google, Canada’s population is just over 38 million inhabitants as of June 2021. Considering that the country covers 3.8 million square miles (9.9 million square kilometers), its population is far from being dense.  Only Russia beats Canada in terms of country size (USA is 3rd, see here: https://www.statista.com/statistics/262955/largest-countries-in-the-world/). Like Russia, a big chunk of Canada is just too cold for most people to inhabit. The majority of Canadians tend to live close to the US border, in the “warmer” climate around the 49th parallel. Some of the country dips below that latitude, especially in the eastern part.

END_OF_DOCUMENT_TOKEN_TO_BE_REPLACED

I thought I would let you enjoy a bit of sightseeing from the comforts of your armchair (or wherever you’re reading this from). 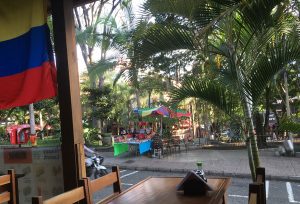 As you can tell from the flag, this is a photo from a restaurant in Colombia (with an “o” not a “u”). It’s one of the countries I lived in for a while, but I never set any of my fiction stories there. Based on the time stamp on my photos, I was there in 2016.